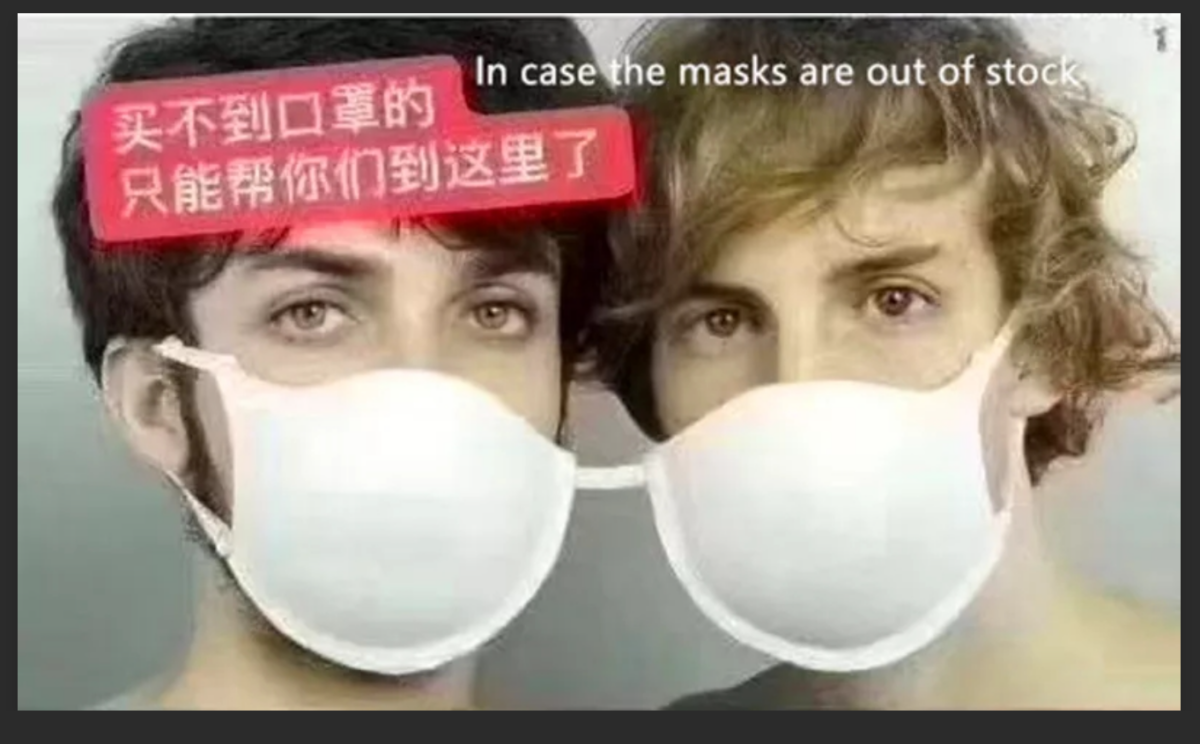 A couple weeks ago, Ohio made national headlines when local authorities set up a hotline to report anyone caught in public in Cuyahoga County without a mask on.

Over the course of a weekend, the hotline reportedly logged over 500 complaints from pro-maskers tattling on the unmasked.

Since then,  Gov. Mike DeWine has imposed a statewide mandatory face mask order.

Pro-mask crusaders, keen on ensuring that their fellow Ohioans obey, have made their position known on social media – and are prepared to verbally pummel anyone voicing an objection to mandated masks.

Those in opposition are labeled selfish, rude, hateful or something worse.

But masked virtue-signalers take warning. There are Ohioans with disabilities that prevent them from wearing a face mask. Harassing, threatening or physically assaulting them could land you in legal trouble of your own.

What’s more, there are numerous law offices offering to represent those who have been harmed by mandatory mask orders by the state. 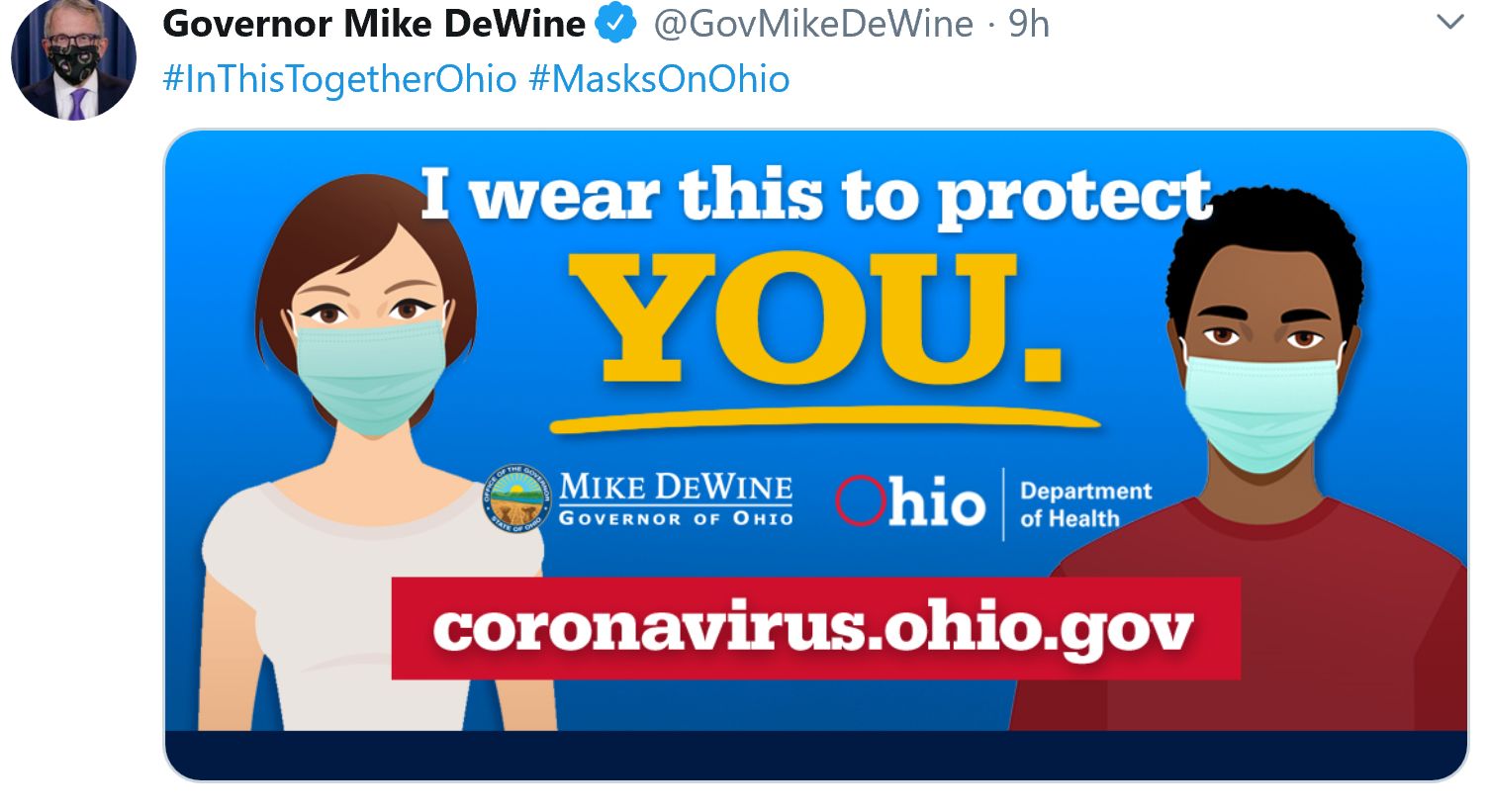 It’s no wonder that pro-maskers feel compelled to single out the unmasked for abuse. This is what DeWine’s “I wear this to protect you” campaign was clearly designed to do, create a fearful situation that pits one against the other. Where neighbor reports neighbor.

DeWine’s Administration is utilizing the same tactics employed by dictatorships throughout history.

Despite having no scientific proof to support its claim, DeWine’s campaign slogan puts forth that, by not wearing a mask, you are leaving another unprotected and putting them in harm’s way.

Regardless of one’s personal beliefs about masks, there are valid health conditions that legally exclude people with disabilities from wearing them, even during a statewide mandate.

Despite DeWine’s obvious lack of regard for those suffering from disabilities, there are federal laws that protect them. Business establishments must be very cautious when it comes to denying access to those with disabilities, which are not always visibly apparent.

Under the federal Americans with Disabilities Act, store managers cannot legally question a disabled person about the nature of their disability and cannot require documentation that a disability exists.

The National Law Review warns that businesses that exclude non-face-mask-wearing customers who claim a disability have to reach a pretty high legal bar or they could be party to a lawsuit.

The 1851 Center for Constitutiona Law says DeWine’s mask mandate is unconstitional in several ways and it contains no enforcement mechanisims.

There are 13 exemptions from the mask mandate, and they are broad enough to exempt anyone at anytime in any place from wearing a mask, according to a statement by 1851 Center.

“Bottom line: if you don’t want to wear a mask, you don’t have to. And if you’re wearing a mask, it’s because you’re choosing to do so,” said the statement.

“In the interim, you’re entitled to disobey these orders, and we will defend those who are prosecuted.” 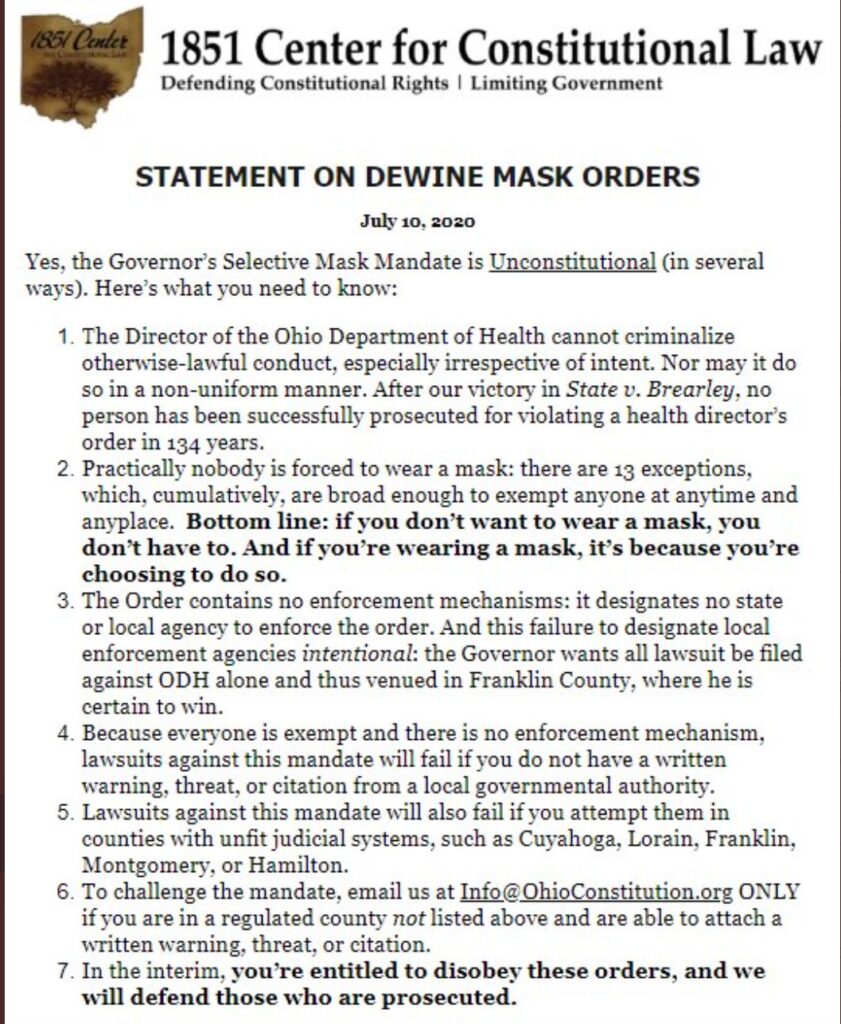 7 thoughts on “Unmasking the Truth: Ohioans Don’t Have to Wear Face Masks”