Small businesses across the state continue to take a financial beating this year, but the food service industry, its workforce and black entrepreneurs are being hardest hit.

Gov. Mike DeWine allowed food service establishments to open for dining, but with imposed mandatory guidelines that some restaurants find impossible to implement without going bankrupt.

The most recent news release from the Ohio Restaurant Association reveals that more than four in 10 Ohio restaurants have closed, and of those, three percent will not reopen. 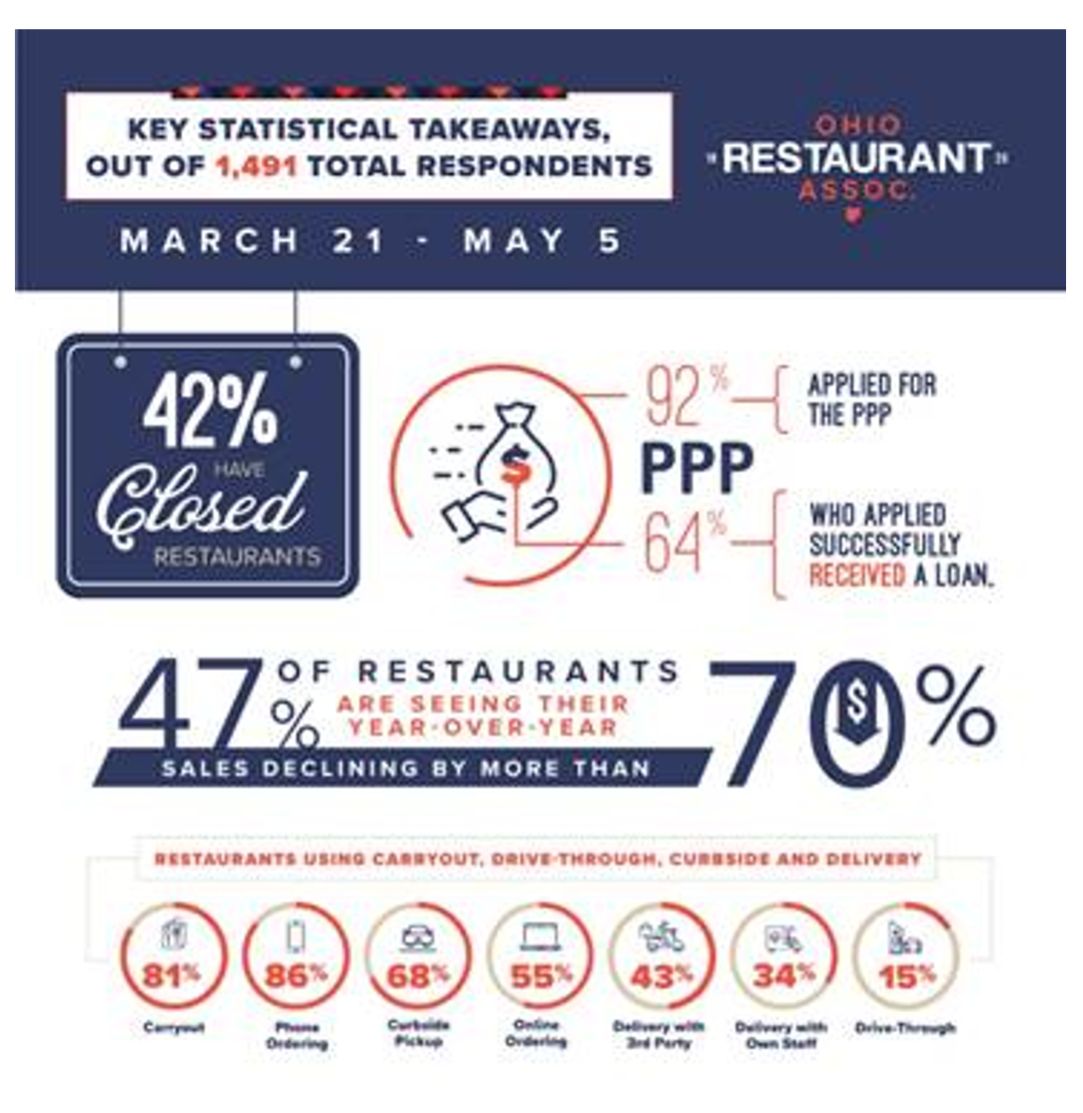 The ORA report stated that nearly half of Ohio’s restaurants had experienced year-over-year sales losses of more than 70% and more than half of the 585,000 employees in the industry are laid off or furloughed.

The impact of restrictions and guidelines on the restaurant industry is a double-edge sword, affecting the businesses themselves and their furloughed staffs.

The downturn comes at a time when the high-end dining industry was finding unprecedented success in Ohio.

African American businesses have been hurt the most among racial and ethnic groups nationwide, with a 41 percent decline of black owners from February to April, according to recent findings from the National Bureau of Economic Research.

Rep. Jon Cross (R-Kenton) who has been pushing for the Governor to ease restrictions on Ohio’s small businesses said, “We cannot allow a health crisis to turn into an economic crisis. Moving forward, we don’t shut down our economy and our businesses. We learn how to handle things differently.”

“We may never get back the jobs that were lost,” said the representative. “Best case scenario, it could take months to get back to where things were before the economic shutdown.

“In this case, it’s about our future economy. We need to handle these things better, wiser, faster, smoother.”

The study found that the number of active business owners dropped 20% (3.3 million) from February 2020 to April 2020, the largest drop on record.

While the COVID economic shutdown has hit entrepreneurs across the board, closing some 3.3 million small businesses nationwide at least temporarily, the sidelining of 440,000 African Americans has been especially severe.

The Small-Business Die-Off is Here, an article that ran this month in the Atlantic,  stated that “the great small-business die-off is here, and it will change the landscape of American commerce, auguring slower growth and less innovation in the future.”

Small businesses make up 99.9% of all U.S. businesses and employ nearly 60 million, or nearly half of all workers.

While unemployment among white Americans fell to 12.4% last month, according to data released Friday by the Bureau of Labor Statistics, the jobless rate for African Americans rose slightly to 16.8%.

One Ohio small business that seems to have weathered the COVID-19 economic shutdown is J’s Sweet Treats and Wedding Cakes on Parsons Avenue in Columbus.

J’s Sweet Treats and Wedding Cakes LLC had just opened its doors for business when the Governor’s lockdown orders were issued.

Juana Williams had been operating out of her home for years before taking the leap and opening the custom cakes and bake shop in downtown Columbus.

“A lot of people assumed we were closed because so many others closed down completely during that time,” said Williams, sole proprietor.

Williams and her remaining staff took a creative approach and posted live on social media each day to let customers know they were still baking and open for carry-out.

“It was March of 2020 that we opened the doors,” said Williams, who retired from 25 years with AT&T before pursuing her dream of owning a bakery. “Columbus started showing us the love and then, Boom! COVID-19.”

Custom cake sales turned out to be the bakery’s saving grace. Though the orders were small, it was enough to sustain the bakery and pay the rent.

“There were no more orders for large wedding cakes serving 200 to 300 people,” said Williams. “We were baking small cakes for birthday parties and other special occasions, most of which would come in at the last minute.”

Williams has four employees. Two were laid off during the shutdown.
“At this point we’re just excited to be back,” said Williams. “I’m thankful that we were able to sustain the business when some were not so fortunate and had to close their doors.

“Columbus is showing us the love and it feels good,” said Williams.

J’s Sweet Treats is one of numerous black-owned businesses in the Columbus area.