State Representative Reggie Stoltzfus is currently serving his first term in the Ohio House. He represents the 50th House District, which includes the eastern portion of Stark County. Stoltzfus was born and raised in Hartville, a community of Stark County. He owns and operates several local businesses, employing around 40 people.
Stoltzfus is actively involved in various community organizations and attends Minerva First Christian Church. He is a member of the Minerva Rotary Club, Stark County Township Association, National Rifle Association, Stark County Farm Bureau and Right to Life (Stark County).
Stoltzfus attended Malone University where he studied Political Science. He resides in Paris Township with his wife and four children. 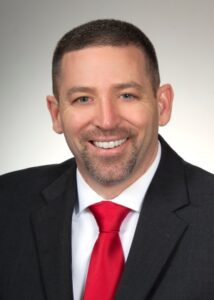 What are your legislative policy priorities or goals for the upcoming session?   My goals are to strengthen families by promoting policies that help families thrive. I am working on foster care/adoption reform so more children can transition into adoptive families.

What surprises/unexpected challenges did you encounter when you started? I am a get it done kind of person. This not the case with government. To be successful at making any policy changes it takes a lot of time and effort. It requires a great deal of collaboration with other members and interested parties to get anything done. This is something I am learning to be more patient with. It’s how our founders set things up so that legislation can be properly vetted. It’s a good thing.

If you could change one thing with the state system, what would it be?                    I would change adoption/foster care policy to make it more affordable and make it easier for solid families to participate.

How do you stay in touch with your district?  I have quarterly office hours in my district where I connect with my constituents. Also, anyone that emails or calls my office with an issue or problem I do my best to reach out to them on a personal level such as a phone call or meeting over coffee.

I also make an effort to attend and participate in events around the community so I know what’s happening around the district.

Early on I was told by a veteran legislator from my county to be responsive and accessible. I have taken that advice to heart and engage with my constituents.

What is the most interesting/unusual request from a constituent?   I had a constituent ask me what I was going to do about Goat milk law in Ohio. Evidently Goat milk is not allowed to be used for human consumption, except in certain cases, and this upset my constituent.

What are some of the attractions or hot spots in your district?  Hartville Marketplace, Hartville Hardware, and Hartville Kitchen is visited by more people annually than the NFL Hall of Fame so I consider it a big deal in the district. We have the Hart Mansion Restaurant in Minerva; People come from miles away to dine there. Maize Valley Winery attracts a lot of folks interested in tasting various beverages and fare.

Ohio is so diverse, what are the primary challenges you’re facing?  Economic development in the gas and oil corridor. Right now, we have an excellent opportunity to build infrastructure to bring industry to the 50th district by expanding Rt. 30 from a 2-lane road to a 4-lane highway. This would be a massive game changer for my district economically.

What have you done to help your district?  I helped Plain Twp. by placing an amendment in the operating budget that allows more than one fire district to serve a municipality. I have worked with the Ohio Department of Transportation District 4 on making our state routes safer through better signage. I also worked with ODOT to resolve drainage issues in the district.

How has your district benefitted from the budget?  In HB 166 we appropriated $675 million over the biennium for enhanced wrap around services which is designed to fund services that address non-academic barriers to student success. This includes mental health, family engagement and support services, and mentoring.

Increased funding for foster care in the budget is something my constituents will benefit from as they look to help our youth in need.