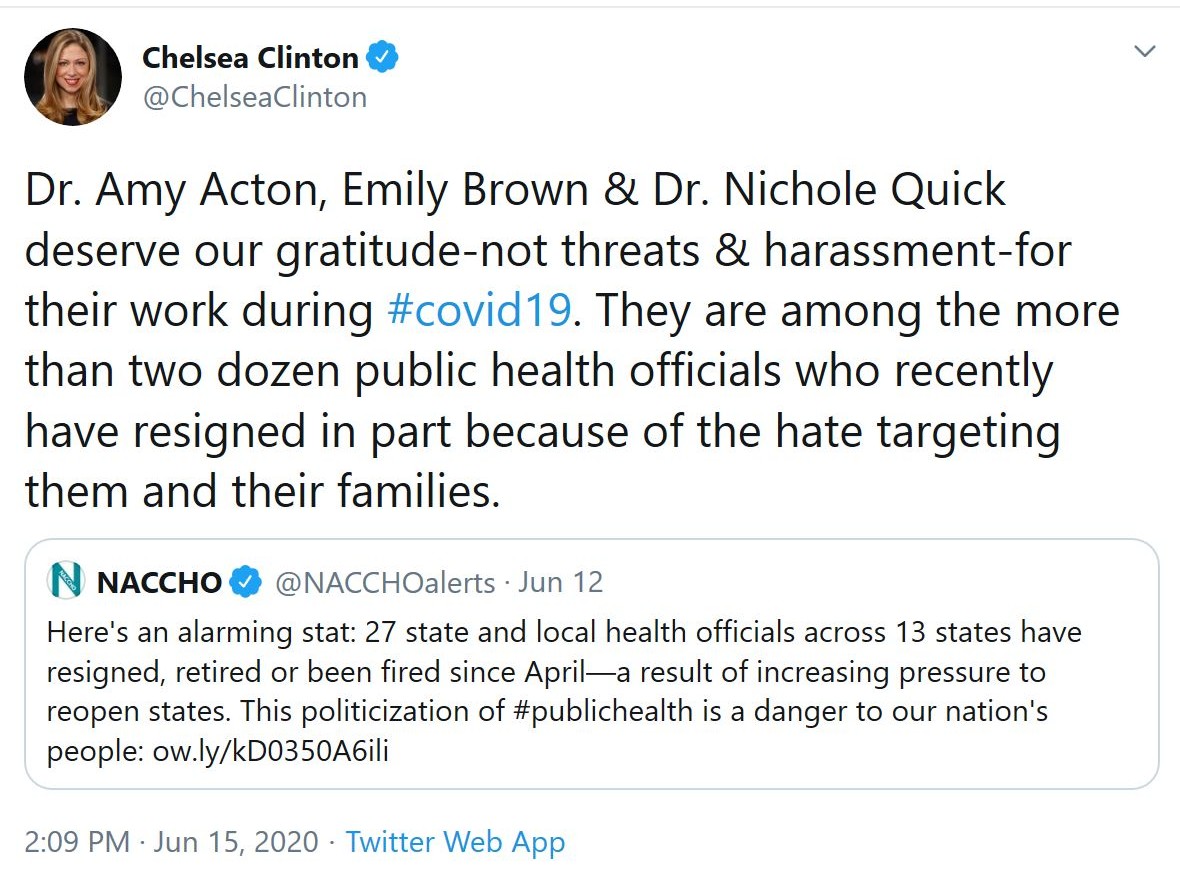 Indeed, there is no love lost between Acton and Ohioans. But it didn’t start out that way.

Ohioans had full faith in Acton, DeWine and Husted. We were glued to our screens every afternoon for press conferences, determined to do our part to “flatten the curve” and “save lives.” But skewed data and escalated fearmongering from our leaders began to erode away at that trust.

Chelsea Clinton serves on the board of the far-left organization Partners in Health. PIH has collaborated with the Clinton Foundation on numerous projects and will be working with Ohio on contact tracing.

While Acton might deserve the gratitude of the Clinton family for promoting their political agendas, Ohioans have only to thank Acton for a crashed economy and prolonging the shutdown, without any evidence to back it up.

As one Ohioan put it, Acton tried to kill a gnat with a sledgehammer.

Acton’s projections couldn’t have been more wrong. In fact, states that did not shut down fared just as well or better in saving lives from Covid-19 as states that did.

Acton’s blunders resulted in an estimated $4 billion dollar hit to the state, bankrupted businesses and disrupted our children’s education. We now have two thousand unemployed and hundreds of released criminals loose on the streets.

Acton started the with faulty modeling and ignored critical real-time data as it became available. Instead of changing course, the Acton, DeWine and Husted trio suppressed factual data and presented Ohioans with misleading numbers and projections.

Right up to the day of her resignation, Acton contended that young, healthy people were dying from Covid-19. In reality, confirmed deaths in nursing homes account for 79 percent of the state’s total deaths.

Our state’s most vulnerable senior citizens in nursing care facilities continue to be overlooked and have little to no access to testing.

Even though Acton resigned, she continues to make the same nearly quarter-of-a-million-dollar annual salary to advise the governor on health issues, this while critical budgets like education and Medicare are cut and Ohioans livelihoods are sacrificed due to DeWine’s ongoing closures and restrictions. On top of this, Ohio is paying a new state health director.

With Acton in his ear, DeWine continues to extend the emergency order in what seems to be an effort to keep Ohioans in his dictatorial grip for as long as possible.

Chelsea Clinton’s remark is a low blow. Acton has worked to promote her agenda and national name recognition, forgetting first and foremost about the people she was appointed to serve