Each week, Ohio Statehouse News profiles one of our state legislators. Representative Thomas Patton (R-Strongsville) is our featured legislator this week. 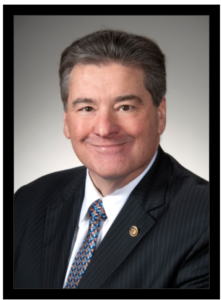 Representative Thomas F. Patton is a lifelong resident of Cuyahoga County. Patton is the son of a Cleveland police officer and the father of a Cleveland Heights police officer who tragically died in the line of duty. Patton has taken up many legislative initiatives pertaining to police, firefighters, and first responders. Previously serving as a state representative and then as a state senator, he returned to the Ohio House in 2016 to serve the 7th House District as the Majority Whip and in 2019 began his second consecutive term.
Patton served in the Senate since 2008, and for the 131st General Assembly, Patton was selected to serve as the Majority Floor Leader. He served as the Vice Chairman of the Senate Transportation, Commerce and Labor Committee, and was a member of multiple other committees including Finance.

Why did you become involved in government?
Back in July of 2001, I was asked to become involved in state government. I was a little hesitant at first, so I told them I’d like to wait it out a little. Then 9/11 happened and something within me called me to serve. Several of my family members have served in the military and being a part of state government was going to be my way to serve the people of Ohio. It was the perfect time in my life to do so since all six of my children were grown up by then. Serving in the House and Senate for the past 18 years has been one of the most enjoyable parts of my life. I can really see when us legislators are making a difference for the whole state.

What are your legislative policy priorities or goals for the upcoming session?
I’ve been working on a PTSD bill for first responders and I’d like to see that make some movement. A lot of people don’t think that PTSD can be affecting someone if physical injury is absent, but that’s not true. The men and women who are serving our country and serving our communities need to be protected when they’re most vulnerable, just like they protect us when we’re the most vulnerable. We owe it to them.

I’m also looking forward to finding a solution for the state’s current report card system and working to better Ohio’s foster care system. We need to prioritize Ohio’s youth and through bettering their education and home life, we can make the younger generations more prepared to be successful once they enter into the real world.

What surprises/unexpected challenges did you encounter when you started?
In 18 years, there have been a lot of surprises. One thing that really surprised me that didn’t take me long to figure out is the time and process it takes for a bill to pass. But that’s just the tenure of our political environment.

I also didn’t expect to have such great relationships with the Democrats as I do. Ever since day one on Capitol Square, I realized that nothing will get done without cooperation from both sides of the aisle.

If you could change one thing with the state system, what would it be?
Term limits. They’re not as productive as people want them to be. I believe that we should increase the terms for state representatives to possibly four years. Afterall, that four-year term works in the Senate. If you’re being productive as a representative and your voters share the same thoughts, I believe you should be able to stay and keep working to represent your district.

How do you stay in touch with your district?
I really enjoy going to local events around Cuyahoga County. I’m a part of a lot of Facebook groups run by different community organizations, so I’m able to stay in the loop of what’s happening and when it’s happening so I can be a part of it. It’s fun to see and talk to constituents in a causal environment. I also make sure that I never miss an Eagle Scout Court of Honor in the district. I always pass out my cell phone number so that constituents feel comfortable reaching out to me with anything they might need.

What is the most interesting/unusual request from a constituent?
I was asked by a senior constituent to accompany him to re-take his Driver’s License test. He passed!

Ohio is so diverse, what are the primary challenges you’re facing?
I think one challenge that Ohioans are facing is the non-traditional route that kids can take after high school to be successful in life. One of my constituents had a son who was excelling greatly in his woodworking class. He ended up going to a trade school and now works for a sheet metal union and is beyond successful. The challenge we have is that so many parents think that if their kids don’t go to college, they’re a failure. And that couldn’t be further from the truth. We need to continue to push support for alternatives, like trade schools, to encourage students to find his or her calling.

What have you done to help your district?
Out of all the things I’ve done to help Cuyahoga County the past 18 years, the one that sticks out to me the most is my work fighting for an interchange between Strongsville and Brunswick. We’ve been working with the Ohio Department of Transportation to complete a study that will have all of the logistics and numbers figured out for the partial interchange by the end of the year, but we still have more work ahead of us until we get this thing built. I’ve listened to the concerns of my constituents and I’m prioritizing their safety to increase the efficiency of traffic between two of the biggest cities in our district.

How has your district benefitted from the budget?
I’m very proud of the work my colleagues and I put into this year’s budget. So many positives have come out of it and directly impacted my district. For example, the TechCred program has been a huge success in Northeastern Ohio. People are beginning to feel more confident about finding jobs and retaining jobs. If we keep the job market strong with programs like TechCred, we will draw more and more people to Ohio, keeping it competitive.