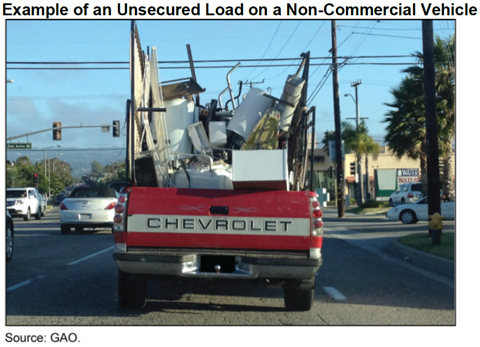 A television reporter’s request for help from an Ohio legislator resulted in a newly proposed law, House Bill 510.

The reporter was Ron Regan of 5 on Your Side in Cleveland. Regan was working on a story and needed some specifics on the number of accidents caused by unsecured loads on Ohio highways.

The representative Regan went to for help was Tom Patton (R-Strongsville).

When Patton obtained the information the reporter needed,  Patton realized there was a serious problem in the state that needed to be addressed.

“The numbers were way up there,” said Patton. “When you’re seeing 6,800 crashes because people are not taking the time or that extra strap to secure a load, something needs to change.”

What Patton discovered was that, according to crash data from the Ohio Highway Patrol, debris from unsecured loads contributed to some 6,794 crashes from 2015 to 2019.

“There were an alarming number of crashes,” said Patton. “Some of these resulted in very serious injuries and even some fatalities.”

Specifically, during that same time period, there were 715 injuries and at least six fatalities, data showed.

Motorists were charged in some of the incidents but the charges and fines were minimal, even when significant injury was involved.

Ohio is among the most lax in the nation when it comes to fines and penalties for unsecured loads. Currently, this offense is capped at $150 in Ohio with no jail time. There is no provision if someone is injured as a result of the unsecured debris.

If passed, House Bill 510 would boost fines to $500 for an unsecured load violation and $2,500 and a third-degree misdemeanor if someone is injured. The violation is currently considered a minor misdemeanor.

Ohio is unlike 28 other states that have maximum fines from $500 to $5,000 and 16 others that provide for possible jail time, according to a Government Accountability Office report.

As introduced, the new legislation states that no trash, rubbish, waste, wire, paper, cartons, boxes, glass, solid waste, or any other material of an unsanitary nature that is susceptible to blowing or bouncing from a moving vehicle shall be driven or moved on any highway unless the load is covered with a sufficient cover to prevent the load or any part of the load from spilling onto the highway.

The exception to this rule, according to the proposal, is when driving or moving a farm vehicle used to transport agricultural produce or agricultural production materials. It also excludes rubbish vehicles in the process of acquiring a load.

The Ohio Revised Code currently only required that vehicles are “so constructed, loaded, or covered as to prevent any of its load from dropping, sifting, leaking or otherwise escaping”.