UPDATED:  We were just informed by the Franklin County Board of Elections that there was a glitch in their system and that Mr. Blystone voted in the 2020 general election.  He failed to voted in the 2020, 2012, 2010, and 2008 primary elections.

As conservative grassroots activists we have to be on constant guard against fraudsters, grifters, hucksters, and outright fakes.  This is especially true for those who are either new or were brought back to this movement by President Donald J. Trump.

Ole Joe got my attention recently when I heard that while on a call with Ohio pro-life leaders, he said that passage of the Heartbeat Bill was “crap”.  Ok.

He then doubled down.

Instead of apologizing he began to attack former State Representative Candice Keller as a “fake patriot.”  When I wrote about the importance of the Heartbeat Bill and Ohio’s pro-life movement he and his handful of minions personally attacked me.

So I took a deeper look at Mr. Blystone.  But first I decided to give him one last chance to explain himself.

Sadly, he decided to dig a deeper hole. 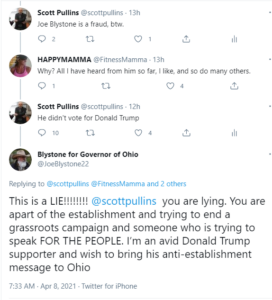 A search of the online voter history for the Franklin County Board of Elections shows that Mr. Blystone failed to vote in either the 2020 GOP primary or the 2020 general election. 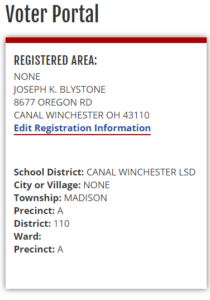 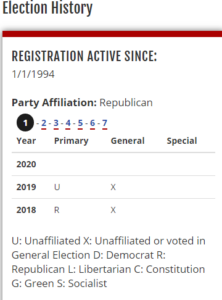 The most important election in our lifetimes and Mr. Blystone didn’t vote either in the primary or general for President Donald J. Trump?  Or any other Republican candidate?  Really?

So I emailed the Franklin County Board of Elections for confirmation and they provided me with a printout of his entire voting history.  A link to that pdf is here.

A supporter of Mr. Blystone is now claiming that Mr. Blystone, his wife, and his son actually voted but that the records somehow have disappeared.  If so, then the conspiracy must run deep, because the official records show that he also failed to vote in the GOP primaries in 2012, 2010, and 2008.

This conspiracy must also run to the federal government. Records from the Federal Elections Commission showed that Mr. Blystone never made a contribution to President Donald Trump until AFTER he lost his re-election campaign.  Wow.

It is very, very difficult to beat an incumbent Republican Governor in a primary.  To do so, Ohio conservatives must unite around a single, solid, well-vetted, well known, and well-funded candidate to even stand a fighting chance.

Most importantly, we simply cannot be fooled by someone who slaps on a cowboy hat and calls himself a patriot.  The stakes are too high in 2022.

8 thoughts on “UPDATED: Ohio Governor Candidate Joe Blystone is a Fraud and We Have the Receipts”