Roy Mercer is a WWII vet and a walking, talking history book. At 96, he’s still as sharp as a tack and knows how to tell a great story.

With the passing of our heroic veterans, memories of WWII disappear every day. The sights, sounds, triumphs and losses – stories gone forever with the soldiers who hade it home from the world’s deadliest conflict.

Most WWII vets are 90-plus-years-old and their memory’s may not be what they once were.

As for Mercer, he still vividly recalls many events and details from his time overseas, where he fought with 693rd Field Artillery Battalion in Scotland, England, France, Germany and finally Austria.

Mercer left his Monroe County home for the frontlines in March of 1943, at the age of 19. When he returned in September of 1945, he couldn’t believe he had made it back alive. “I didn’t even catch a cold,” he joked. 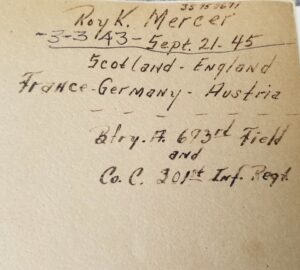 At the end of the war, Mercer witnessed the Germans surrender in defeat as they marched out of Berchtesgaden, home of Adolf Hitler’s famous mountain retreat. 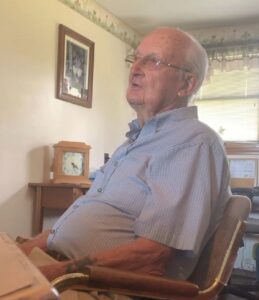 Mercer’s nephew, Wilfred Hodge, an infantryman who was about the same age as Mercer, wasn’t as fortunate. Hodge was killed in the line of duty in Belgium in November of 1944, when was hit with artillery fire.

Hodge was the son of Mercer’s older sister.

Both Mercer and Hodge were from the same small community of Jerusalem, in Southeast Ohio.

Like most WWII soldiers serving in Europe, Mercer slept outside on the ground every night. 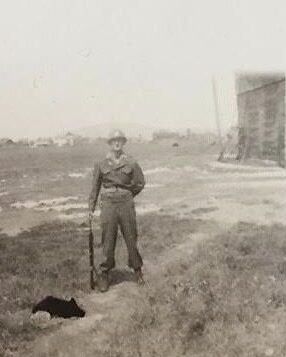 When Mercer left for the war, his mother was ill with TB. When he returned, she was nearly bed-ridden and died a short time later.

Today, Mercer lives in the same quiet Jerusalem neighborhood he grew up in. He sits on his front porch when he’s not busy in his shop, where for many years he made intricate wooden grandfather clocks. He also worked in the oil fields for several decades.

If you pull up a chair, Mercer might share some stories of his WWII experiences, while leafing through a scrap book his family put together with pictures he sent home during the war.