If you’re thinking about cutting your own hair during home confinement, be warned. There’s a good chance you will end up with a dreaded #CoronaCut.

Hair salons are considered nonessential in the eyes of the state. Most have been closed for at least three weeks. By now, vanity could be getting the best of you as you contemplate a DIY doo.

But hair pros say don’t do it! Patience, in this case, truly is a virtue. Wait for salons to reopen.

Matthew Rodinsky, a hairdresser at Cirque de Cheveux, in Wheeling, WV, advises folks to “embrace” their isolation hair. He compared cutting your own locks with the kitchen scissors to fixing a toothache with a drill from the garage.

“Cutting your own hair is only going to make it worse for your hairdresser to fix and it will cost extra money,” said Rodinsky. “You’re still not going to be happy because it’s not going to be an instant fix.”

This advice may come too late for those who have already taken matters into their own hands. The good news is, there’s still time for your DIY hair cut to grow out (at least a little) while home-isolation is still in effect. Or you could voluntarily extend home quarantine if vanity deems it necessary. 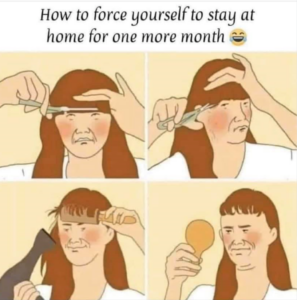 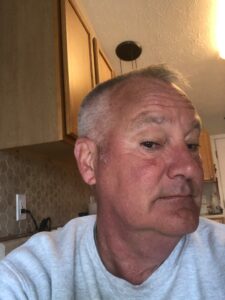 Some people seem to defy all odds and end up with nice hair despite it all.

Greg Reinhard gave himself a top-notch clipping and looks very pleased with his handiwork. Not bad for an amateur!

Not everyone is as good with the clippers as Reinhard though … 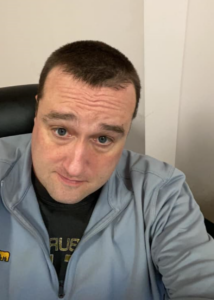 Craig Brown said his wife “laughed maniacally” after giving his locks a going over with the electric clippers.

Apparently, the basic crew cut isn’t as basic as she thought. Brown’s hair had more of a bi-level look when his wife was finished.

Brown was a good sport about it.

It’s hard to know for sure what Jasmine Ervin’s two-year-old daughter had in mind for a doo when she began cutting away with safety scissors. 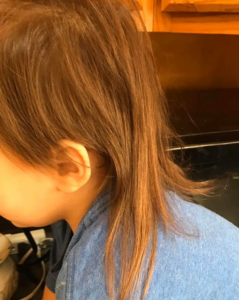 The aspiring cosmetician was stopped mid way when mom intervened. The little one was left with a partial mullet, much to mom’s dismay.

This is something that Valerie Geibel-Wells could normally fix. Geibel-Wells owns three Ohio locations of Cookie Cutters Haircuts for Kids. She said her clients are begging her to reopen and she expects to be very busy when that happens.

In the mean time, she discourages DIY hair cuts and urges her clients to be patient. 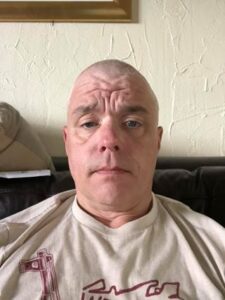 Instead of waiting around for his barber to return to work, JT Todd took action recently and buzzed his own hair.

When Todd realized he didn’t own hair clippers, he borrowed his dog’s.

He may have gone a little shorter than he wanted. Thankfully, Todd doesn’t plan to take up professional dog grooming anytime soon.

Laura Laser has some advice for women whose spouses are  pressuring them to cut their hair.

“Do NOT cut your husband’s hair. No matter how much he begs you. Nothing good can happen. Especially if you make him look like Moe from the Three Stooges. I’m sorry honey.” #coronaHaircut 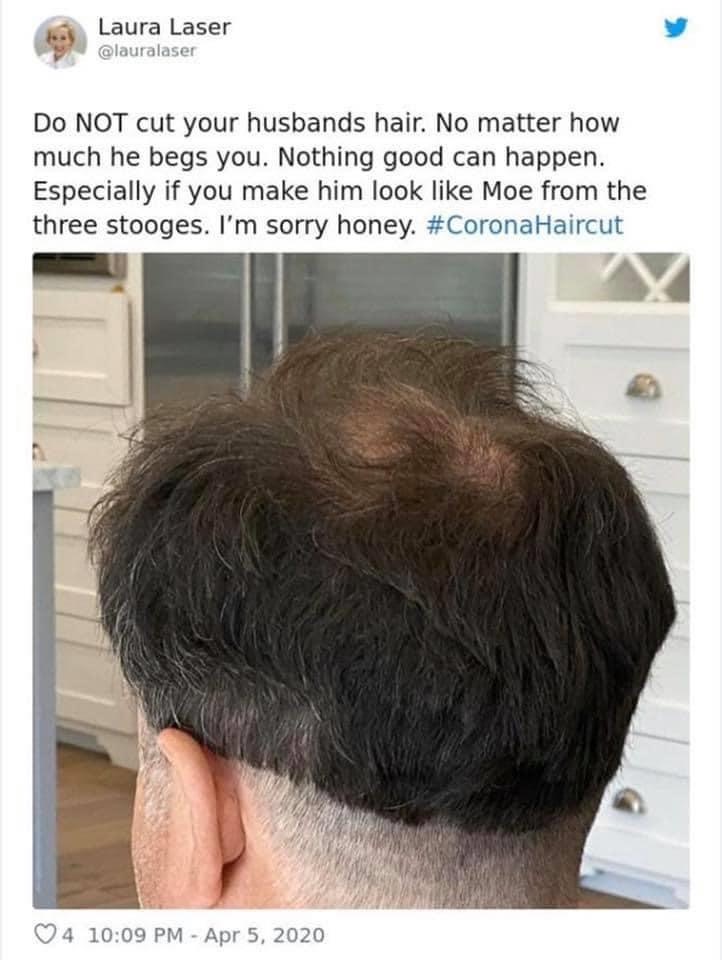 A brand new, bolder hair color may feel like just what you need to ride out the COVID crisis. But take it from Glenda Lynn Gambill, normally a blonde bombshell, hair color from a box can be tricky. You don’t always end up with the color displayed on the package. 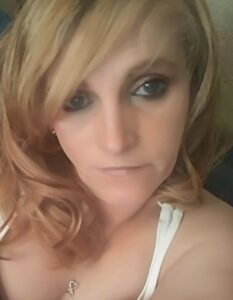 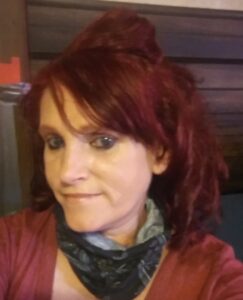 Gambill was none too happy when the auburn dye turned her mane candy apple red. Weeks later, she’s still trying to tone it down.

Ohio Statehouse News guest writer Del Duduit oiled up his clippers and ended up with a decent buzz cut. It’s unknown if this was due to luck or skill, and Duduit claims the view from the back is as snazzy as the front. We will take his word for it. 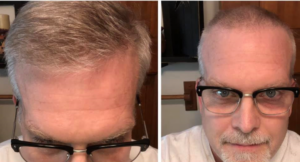 If you’re counting on the Flowbee to save your hairstyle during the Corona shut down, it will cost you  a pretty penny. Apparently they’re selling like there’s no tomorrow and the price has skyrocketed. 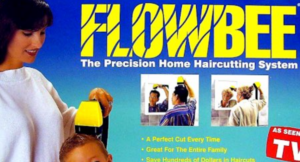 Last, but not least, if you really flub up a #coronacut, you may as well have some fun with it. This little guy was a good sport and allowed his mom to age him forward half a century. What a cutie pie. 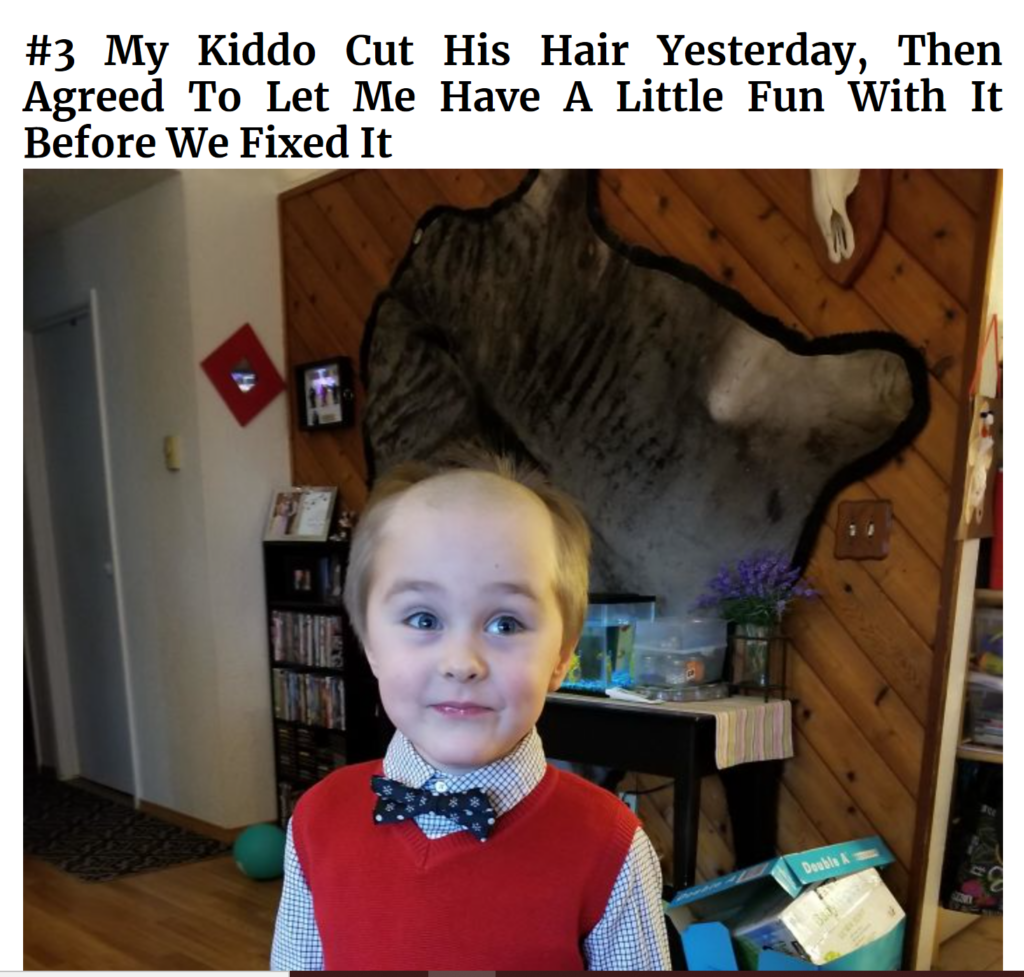