It looks like the conservative national media is finally catching on to the antics of RINO Ohio Governor Mike DeWine.  Take this excellent write up on the passage of SB22 by Daniel Horowitz of The Blaze:

In Ohio, we have the first legislature in the country to finally pass a meaningful limitation on emergency health powers through both chambers, with margins likely large enough to override a gubernatorial veto. Gov. Mike DeWine is irate that legislators think they have the power to check him in his capricious edicts governing the most intimate facets of human life and commerce. Yet despite his promise to veto the bill, every legislator in his own party will likely override his veto. 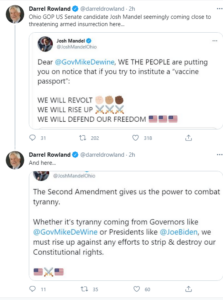 Since the Wolfe Family sold off the Columbus Dispatch, what’s left of their once vaunted Statehouse news team has rapidly gone down hill.  Take Dispatch Senior Editor Darrel Rowland for example.

As the old saying goes, close only counts when playing horseshoes and hand grenades; and sorry, not sorry Darrel, this isn’t it.  Meanwhile, the sewage cesspool that is Darrel’s comment section is full of more nonsense and cries to censor and de-platform conservatives like Josh Mandel.

And don’t forget folks, the Ohio Statehouse News isn’t funded by big New York based hedge funds like the Columbus Dispatch.  So if you can, throw a couple dollars our way by donating online here.

The next step for Stark County is the need for public hearings on the dangers of black box voting equipment and the benefits of open-source alternatives for restoring faith in election integrity, lowering costs, and growing local jobs.

This is the second recent major victory for Look Ahead America’s effort to eliminate black box voting equipment following the state of Louisiana’s withdrawal of a $100 million contract for black box equipment last week.

WHAT IS OPEN SOURCE? Open source is software or hardware with source code or a design that anyone can inspect, modify, and enhance. Learn more about open source here: https://opensource.com/resources/what-open-source.

MATT BRAYNARD is the former Director of Data and Strategy for the Trump campaign. He drafted and executed the strategy of targeting low-propensity voters who had a high affinity for President Trump. He is the president of Braynard Group, a political and digital strategy firm. He has worked for over one hundred federal, state and municipal candidates, and many national advocacy organizations and non-profits. He previously worked on messaging and survey research for Frank Luntz, was a senior redistricting and election administration analyst at Election Data Services, and served for three election cycles in the Republican National Committee’s Political Analysis department. Prior to joining the RNC in 1996, Matt was a field coordinator for Buchanan for President. 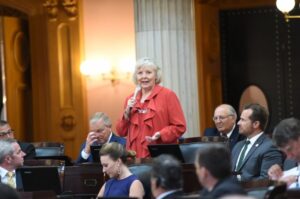 Why is the liberal, dark money funded fake news Ohio Capital Journal lying about State Representative Diane Grendell?  And why is no one but this little newsletter standing up for her?

Grendell sponsored the “Truth in COVID Statistics” bill last legislative session, which passed the House but died in the Senate. When presenting the bill to the Senate, Grendell made a number of conspiratorial claims including that Ohio’s coronavirus data “has been corrupted” and that “they” are paying college students $20 to get tested.

With just two minutes of research, anyone could quickly determine that old Jake was full of it.  In fact, here’s what the official incentives page from THE Ohio State University says:

Students who schedule and complete their weekly, required COVID-19 test will be eligible for a variety of incentives. Incentives include:

And don’t get me started on the problems with the data on COVID19.  There are books being written now about all of the errors.

If you would like us to continue producing this kind of research and content, then please consider making a donation by clicking here!

Conservative Congresswoman Marjorie Taylor Greene has been utilizing procedural votes to help gum up the stampede of Congressional Democrats towards socialism.  And you would think that Republicans would help those efforts.  Unfortunately not these liberal Ohio Republican members of Congress.  In a recent vote, Ohio Republicans Bob Gibbs, Dave Joyce, and Anthony Gonzalez joined with Democrats in voting to proceed on the $1.9 trillion Blue State Bailout.  Here’s a pic of the 40 total GOP turncoats: 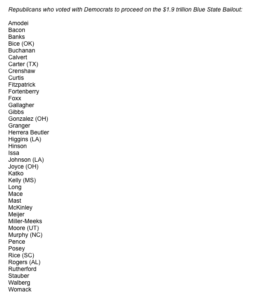 Former Congressman Jim Renacci will be holding his 5th virtual town hall tomorrow evening.  He will be joined by conservative reporter Jack Windsor and will answer your questions.  Here are the detail:

I wanted to write and provide you with a much overdue update on Ohio Statehouse News. As you may recall, this web based, Ohio conservative news outlet was started just over one year ago. At the time we had a funder who had provided the site with the financial resources to pay a full time Editor, along with a part time Publisher and Contributing Editor.

Unfortunately, that financial support ended in August of last year. As a result our full time Editor, Cheryl Stephen, has departed the site and returned to her work on her farm and with animal welfare issues. Cheryl did an incredible job and she will be greatly missed!

Since then, my company and I have acquired this site and we have been working diligently to keep it alive. You will begin to notice that we have begun taking some text based advertising and will eventually be entering into affiliate relationships with some conservative advertisers. Finally, we will be making a renewed push to ask you for some financial support. You can easily make either a one time or a monthly recurring donation by clicking on this Paypal link.

As you may remember, this is the third conservative Ohio based news site that I have been associated with. I wrote for the now defunct 3rd Rail Politics site, The Ohio Star, which is still in existence, and now this site.

As we mentioned earlier we could also use your financial support. I have no intention to take a salary from this site but I would like to hire some contract writers in the future, along with helping cover the costs of hosting, mailchimp, advertising, etc.

I thank you for continuing to read and comment on the site. I hope to start producing some fresh articles shortly and hope you will continue to read us. Thank you.

COVID 19 and the shuttering of Ohio’s businesses is having a significant financial impact on the agricultural industry. This coupled with the fact that Ohio farmers were hit hard in 2019 by higher than average rainfall that forced many farmers to forgo the planting season, and a trade war with China and the states $125 billion agriculture industry is in crisis.

State Representatives Jason Stephens (R- Getaway) and Gary Scherer (R-Circleville) have introduced House Bill 485 which alleviates bureaucratic red tape for farmers by removing a requirement that owners of farmland enrolled in the Current Agricultural Use Valuation (CAUV) program file a renewal application each year in order to remain in the program.

While this doesn’t undo the economic hardship facing farmers it does take away the threat of qualified farmers losing their property due to government paperwork procedures.

According to joint testimony provided by both Representatives Stephens and Scherer the CAUV program is designed to permit agricultural land values to be set below true market values, at its current use value. The formula for CAUV values incorporates agricultural factors (soil types, yields, prices, and non-land costs for corn, soybeans, and wheat) to calculate the capitalized net returns to farming land based on the previous 5 to 10 years. This program allows commercial agricultural farmland to be valued based on its value in agriculture, rather than the full market value, which can result in significant savings for farmers.

A renewal application must be filed every year before the first Monday in March to continue in the CAUV program.

Along with the application process, county auditors are also required, each year, to inspect the farmland on CAUV, to ensure continuing compliance with commercial farming.

These landowner will still be required to report information demonstrating continued qualification for the CAUV program if they meet one of two criteria.

1. The owner of a plot of land of less than ten acres must document the yearly income earned from that land. Small plots of land qualify for CAUV only if the land generates at least $2,500 in annual income or is enrolled in a federal conservation program. Currently, the renewal application requires such information to be provided for such plots.
2. The owner of CAUV land that becomes enrolled in a federal conservation program after initially qualifying for the CAUV program must provide to the county auditor a copy of the agreement between the owner and the federal agency. Land enrolled in a federal conservation program continues to qualify for CAUV even if it is no longer actively used for farming. Currently, that documentation must be provided with the first renewal application after enrollment in the federal program.

Should H.B. 485 become law the new CAUV program application procedures apply to tax years beginning on or after the bill’s effective date.

For working farms over 10 acres both Stephens and Scherer state that requiring these farmers to complete the renewal application every year and requiring the county auditor’s office to check the farm land each year results in unnecessary redundancy and difficulties for working farmers across Ohio. Under H.B. 485, the county auditor’s office will still be required to check the farmland annually, as in current law, but these farmers will no longer be tasked with the renewal of the CAUV application.

State Representative Jason Stephens serves residents of the 93rd House District, which includes Jackson and Gallia counties, as well as portions of Lawrence and Vinton counties. Stephens is the former Lawrence County Auditor and has first-hand experience addressing the challenges of CAUV. “CAUV was put in place in the 1970’s before auditors had access to aerial photography and other forms of technology to assess land valuations. The goal of this legislation is to simplify the process. CAUV is cumbersome for the farmers and is an unfunded mandate for local governments.” Stephens continues, “If you look at homestead and owner occupancy it is left to the auditor to administer and not written specifically into law as is CAUV. The goal is to give each county auditor flexibility to ensure each farmer is receiving CAUV while eliminating unnecessary paperwork.”

Under current law, failure to file the renewal application results in detrimental effects to the farmers. Not only does failing to file the application result in converting the CAUV land to a non-agricultural use which can cause significant financial loss, but land that no longer qualifies for CAUV is also assessed a recoupment charge upon removal from the program. According to current law, if the farmer does not return the application, for whatever reason, then they lose the CAUV credit for their property and their taxes most likely will go up. For many farmers this would result in losing their property.

The legislation was introduced in January and is being considered by the House Ways and Means Committee.

“I am very aware of how difficult farming is especially for small family farms. We can provide regulatory relief for farmers that makes sense and that maintains the goal of CAUV. It may be a small change but for the people it impacts hopefully it is one less burden.” Stephens concluded.

According to the Small Business Administration (SBA), “small businesses can obtain up to a $10,000 advance on an Economic Injury Disaster Loan even if a previous application was denied.”

This loan advance will provide relief to businesses that are currently experiencing a loss of revenue because of the COVID-19 pandemic.

The SBA has stated that the funds will be made available within 3 days of a successful application. This advance does not have to be repaid.

The application for this advance is online and Ohio small businesses can apply by clicking here. There is no word yet on how long these reviews will take or when these advances will take place.