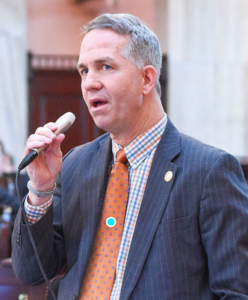 We are very saddened to learn that Andrew “Andy” Thompson, former member of the Ohio House of Representatives, died suddenly today. Thompson represented District 95 from 2011 to 2018. He was unable to run for re-election due to term limits.

Thompson also served on Marietta City Council since 2005 and was co-publisher of his family’s magazine, Bird Watcher’s Digest. He was Eastern Ohio Development Director for Appalachian Ohio.

Thompson was married to Jade Thompson and the couple resided in Marietta. He was 57.

Thompson was a great conservative who cared deeply about all of his district and especially his home of Washington County. Those who knew Thompson say he was kind, generous and authentic. He will be missed.